We had the opportunity earlier in June 2019 to interview The Orville comic artist, David Cabeza. We will chat about this interview on our next podcast that will coincide with the release of issue 1, but wanted to put this out here for you now.

We will also be giving away a signed art board print in early July autographed by Seth MacFarlane, David A. Goodman, and David Cabeza. Watch our social media accounts for details.

When did you start to draw and when did you know you wanted to do an art career?

I started to draw very young, I think I was 5 or 6 years old. I remember seeing a picture of Mazinger Z (the anime series) in a magazine and told my mother “How do I draw this?” and she replied “you just have to look good and try to do it like the one in the picture”. That day I realized that I was good at drawing.
I never considered focusing my life on art. I did not know what I was going to study or what I was going to do, but I didn’t think it would be related to drawing. But I ended up studying Fine Arts because drawing was what I was better at, although the truth is that I still did not have very clear if I wanted my life to be so uncertain. When I was 17 years old it was the manga boom in Spain and I became very fond of Japanese comics, I think it was then when the idea of ​​being a cartoonist started to haunt my head. After college I spent 13 years dedicated to the world of advertising and graphic design in a company that never finished taking off so I ended up getting tired of not seeing my life advance and on the verge of turning 40 and newborn my first child I decided to leave everything and start to draw comics. It was the worst moment to make that decision, but you only live once so I threw myself in the deep!

What was your education / training?

As I mentioned, studying art, but honestly, it has served me little to do what I do today, perhaps only to not start from zero in terms of drawing skills. You study many disciplines in Fine Arts but not “comic book drawing”. That’s something I’ve been learning for myself, reading and copying my comic book heroes, and I’m still learning (and will continue to) doing it. This comic is my first comic in the US market as artist and in Spain I’ve done only quite a bit, so I’m a beginner.

Was the “comic” style your first medium or did you start as a different type of artist? What is the art work of your dreams?

When I left university I wanted to be a painter, but it did not take me long to realize that gallery artists’ is a difficult world, you need more skill as a public relations than as an artist and someone shy like me is not good for that. Then I went to web design and I spent a lot of time creating both web pages and animations in Adobe Flash. Drawing comics is quite recent: I started in 2011, with some short stories quite bad, and in 2015 is when I decided to try to get into the American market.
I’m doing a job that I wouldn’t have dreamed of a couple of years ago! But I would like to have good level and speed in a few years to draw regular superhero series, although I do not close anything as long as they are comics! I have my style yet to develop, and the truth is that I do not know if what I do would really fit in Marvel or DC, but you never know.

Did you see anything of The Orville before they approached you to draw it?

No, I did not know about the show. So I had to watch the first season in a hurry to know what I was up against. The truth is that I like it a lot, I have become a big fan! Before I was selected to make the comic I did a test, a couple of samples about the beginning of the script of episode 6 of the first season (“Krill”), that David Goodman adapted to comics for the aspirants to present our work.

Do you use episodes of the program as a visual reference or still photography?

Both things, but perhaps the show is better reference than the photos. I also create my own references continuously: photos of relatives or of myself, articulated figures … whatever it is to do the job as best I can. Sometimes I have also looked for the actors previous works on TV or movies to have more reference material, it is crazy! I am very thorough with the details of characters and backgrounds and that makes me go much slower than I would like. It’s really time consuming checking everything constantly, but very rewarding when you see the final results.

What is your process to bring The Orville to the page?

I read the entire script with attention a first time and try to form an idea in my head about how to arrange the panels on each page. David Goodman suggests the POV of many panels and I usually follow his instructions (which helps a lot to give the comic that “The Orville feeling” someway) unless I think I can do something that works better, I consult him and see if it I can do it. I work all the comic in digital, from thumbnails to inks. I make the layouts of all the pages in a very schematic way in a file in which I have 20 small thumbnails and then I redo it in a new layer as if they were rough pencils, all this in a very small size. I lose a lot of time in layouts, it is without a doubt the most complicated part. Then I make the pencils, deliver them via e-mail to my editor in Dark Horse and David, 4 pages per week (although many times I’m late!), I receive feedback, and finally the inks, of which I sometimes have to make small revisions.

What has been the funniest part of drawing the Orville comic?

Playing with the characters we know from TV, it’s exciting to be drawing them! Portraying them is complicated, but little by little I’m improving.

What has been the most challenging part of drawing the Orville comic?

Everything is! But perhaps the most difficult thing is to get the resemblance of the actors. With Ed I don’t have problems, but with Gordon, for example, it costs me a lot! It has also been complex to design some elements and characters to fit in this universe, that the reader sees them and doesn’t consider them something that doesn’t fit in The Orville universe.

What do you want readers to get from the comic?

I’d love the already fans to like it and I’m trying hard to make the comic be like watching another episode of the TV series, but I’d like also those who read these stories without having seen the show to like the comics. It would be great if the comics brought them to the series if they have not watched it yet!

Would you like to make more comics (be it The Orville or another series)?

Definitely! I would like to continue with The Orville if possible, and, if not, continue working in comics in other projects. The decision I made to be a comic book artist is firm, there is no turning back! Being my first job in the US market I’m excited to know if people like it. Hope everything goes well.

What advice would you give to others who wanted to draw comics professionally?

To never conform with what they do, that they always try to improve with each page. This job needs many hours of practice (this point isnever insisted enough), being self-critical and also receiving feedback from professionals, who are the ones who really know how to help you. Many times their critiques are going to be harsh, but precisely those are the ones that really help you to improve. I would also recommend, at least at the beginning and whenever you have a more or less decent level, to have an agent that moves your samples through publishers/editors. It’s faster than going through the conventions trying to show your portfolio or getting tired sending samples by email that usually are never answered.

Is there anything else you would like the fans to know about you?

Only that I’m putting all my effort and dedication into these comics. Actually, the whole creative team is doing so. The Orville is being a great opportunity, a challenge and a lot of responsibility. Starting in American comics is a dream for me, but it’s a lot of pressure too. Hopefully the result will please the fans and enjoy our work as much as we do.

FEAST YOUR EYES FANS OF THE ORVILLE!! Planetary Union Network: The Orville’s Official Fan Podcast is bringing you the Season 2 Gag Reel! There are some “NSFW” words so take that under advisement.

By popular demand, Planetary Union Network: The Orville’s Official Fan Podcast is bringing you this exclusive full song only version of Scott Grimes and Leighton Meester’s duet from The Orville episode “Lasting Impressions”.

The Planetary Union Network is pleased to share the Season 1 album cover and track listing with you here first.

The 2-disc album will be released on January 22nd, 2019 from La-La Land Records. 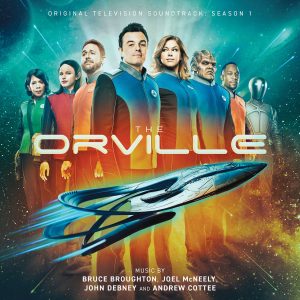 Your hosts at the Planetary Union Network are pleased to share an exclusive The Orville Season 1 visual effects breakdown video!

Disclaimer: Any use of this video without express written consent is strictly prohibited.